At a glance, the  Ship’s Bell and Barometer Set is the paramount symbol of the standards that Chelsea Clock has adhered to since 1897: exquisite craftsmanship, precision and timeless.  But if you look beyond the pristine brass cases of classic pieces you will find a confluence of scientific invention and human progress. 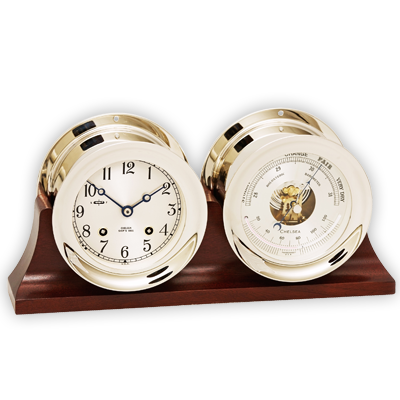 The Ship’s Bell history as a mechanical clock and the Ship’s Bell Barometer as a teller of the weather at sea are a testament to how one discovery, that at the time may seem insignificant, served as an integral building block to scientists for centuries.

Just as Chelsea Clock enthusiasts have placed these two pieces side by side on mantels for decades, author Kendall Haven places inventions, the barometer and mechanical clock, side by side in his book, 100 Greatest Science Inventions of All Time.

The discovery of the barometer has led to many scientific inventions. It assisted travelers in detecting weather patterns while its sensitivity to air pressure laid the groundwork for the invention of the steam engine, which inspired the industrial revolution.

Evangelista Torricelli, scientist and side-kick to Galileo Galilee, discovered the vacuum in 1643, which later led to his creation of a device that measured atmospheric pressure. Eventually, others realized that the barometer could assist in predicting weather patterns. Further improvements gave birth to the marine barometer, a nautical instrument used for tracking weather and alerting sea voyagers about inclimate weather, thereby allowing them to carve out routes based on past data.

Since the 1900s Chelsea Clock Ship’s Bell Barometers have provided readings on fluctuations in barometric pressure as well as accurate temperatures. It has assisted the United States Navy in its duties as well as served as a companion to those who navigate the seas.

In 1657, Dutch scientist Christian Huygens applied Galileo’s discovery of the scientific formula behind a pendulum’s swing. He integrated a pendulum into the clock’s makeup, forming a precise mechanical clock that enabled further scientific exploration.

Chelsea Clock celebrates the scientific discoveries of yesterday and elevates the Ship’s Bell Clock to an American classic. Since 1898, this nautical marvel has alerted mariners about their watch at sea with it signature chiming bell. Today it can be found on many U.S. Naval ships, proving its worth as an enduring timepiece and heirloom.